Khairi The Tigress, Princess Of Simlipal 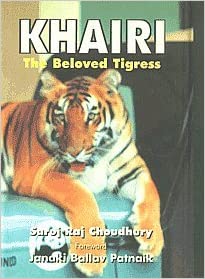 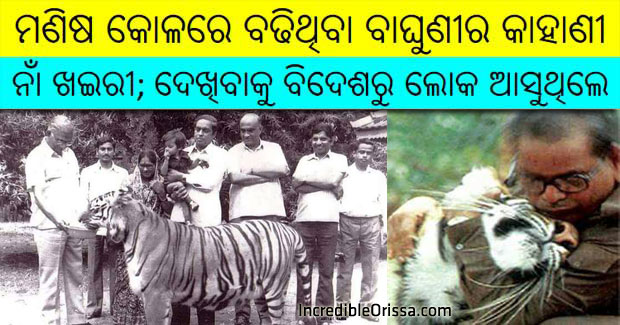 Khairi The Tigress, Princess Of Simlipal

I met Khairi on our picnic trip from school at the age of 11. We were permitted to go to Khairi's home which was a guest house/ quarter of Mr. Saroj Raj Choudhuri a Forest Officer who had reared Khairi as his daughter. We entered the bedroom where Khairi slept with her parents. Two cots were placed near opposite walls and the open space in between was where Khairi slept. When we reached her place, Khairi was lying on her cot in the courtyard. She was a full-grown majestic tigress in her youth, lying gracefully on her belly. Her eyes became wide seeing a group of children but there was no anger. All our previous apprehension gradually dissipated seeing her playful mood. Her friend a dog named Bagha was playing around her. Khairi got up and sat on the floor. Mr. Choudhuri permitted to click a photo with Khairi. Just after the photo was taken, Khairi became active. Probably someone had touched her tail. Mr. Chaudhury immediately separated us from her lest some untoward incident happen. 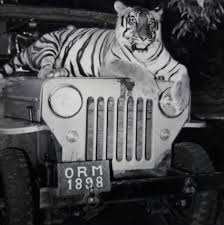 The whole experience left me to spellbound. This reminded me of an interesting article " Tigress Of Odisha " by A.N Tiwari. It is written that the present-day direct air link between Bhubaneswar and New Delhi owes it to tigress Khairi. The then Minister for Tourism Odisha brought it to the attention of Union Minister for Tourism Mr. Raj Bahadur that Odisha required direct connectivity and also roused his curiosity and invited him to come to Odisha to meet the unique tigress Khairi.
Khairi was brought from Jashipur for this special occasion and was kept in the adjoining room. The Union Minister had come with his full team and was sitting waiting to see her in the adjoining room. The connecting door was opened and entered her Highness with grace and arrogance. There was pin-drop silence. Everyone froze seeing a live tigress in a closed room. Khairi moved around and then with utter disdain urinated on the wall opposite to where the Union Minister was sitting. Minister was simply mesmerized. Khairi also gave a pose for a photoshoot with the Minister and his team.

On return, The Minister announced a direct flight from Delhi to Bhubaneswar. Khairi's appearance certainly expedited this decision which otherwise would have taken some time. Thanks to the princess of Simlipal. This route owes it to her. 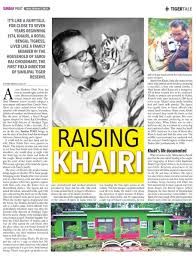 Let me now relate to you how Khairi a cub came to Mr. Choudhury to be reared up like a human child. Being in so proximity with a tigress he could study her behavior and bring it to the public domain. The pugmark enumeration methodology of the tiger is one such finding to count the tiger population. There was no other method and nobody till then could comprehend how tigers census could be done in wild.
This little cub was stolen from her mother by a group of Kharia tribesmen from Jenabil village of Simlipal on third October 1974. That day they were out in the upper reaches of river Khairi to collect honey, tubers, raisins, etc. being food gatherers. There they came in close quarters with a tigress with three cubs. The men started shouting out of fear. The tigress must have felt uncomfortable seeing this large congregation of humans and the loud noise. She left the place leaving behind her cubs. Her cubs started following her. One of them caught a cub and wrapped her in a cloth. The cub was too stunned to react or make noise. Had she whimpered, the mother would have certainly charged and all interesting episodes with Khairi would never have happened. The Kharias brought the little cub wrapped in cloth in a basket to their village. The next day they traveled to Jashipur and handed her to the Range Officer.
The little cub was brought to Shri Saroj Raj Chaudhury the then Conservator of Forest chained in thick rope. The moment the basket was opened, the cub snarled at the onlookers in self-defense. Mr. Choudhury who was an expert on wild cats imitated the vocal sound of greeting of a tiger something which sounded like clearing of one's throat softly. The cub was immediately pacified hearing a sound that resembled something that of her mother. She reciprocated with a soft sound something like unh - unh - unh. Mr. Choudhury again recreated the similar greeting sound, removed all chains on her body, and brought her to his lap and lifted her on his shoulder with his face close to his. That moment was a turning point in the life of the cub whom they named Khari as she was brought by the Kharia tribesmen from near river Khairi. She got a new family and a father for a lifetime. The lady of the house put her on her lap and caressed her lovingly. The cub closed her eyes and went into a deep slumber for almost two hours. When she got up she purred and rolled with her belly up in a gesture of acceptance displayed by a full-grown female to a male tiger.

The cub had been without food for almost two days. They tried to feed her with spoon and bottle but she was not used to that. Then they opened her mouth and poured some. After a while, the lady folded her saree and kept it below her cot. The cub came and slept on it. Later that night, the cub scratched the bed. Mr. Choudhury put the light on. The cub was standing near the mosquito net of her mother. She was let in and within no time they slept hugging each other. This little cub grew from a bare 6.2 kg and 88 cm in length to nearly 200 kg weight and 273 cm length. I have heard that she loved to eat her meat dipped in Amul milk powder. Of course, I could not verify this fact. 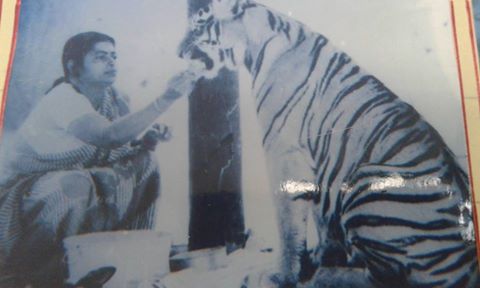 If you have seen the film on Dr. DoLittle, Mr. Choudhury's house too resembled his abode. An animal lover, besides Khairi, his home had Bagha the puppy and Kalia its mother, Chhabi the python, Jumbo the sloth bear, Baina the blind Hyena, Mainka the antelope, Pukul the jungle cat, Jhuna the mongoose, Beda the wild boar, Ti the Indian civet and Chumki the leopard. The friendship between the prey and the hunter was really puzzling. Here Khairi learned to live, play, learned life skills, and was punished sometimes if she did not obey. Mr. Choudhury maintained a daily logbook on Khairi's movement, he conducted research on the behavior pattern of tigers especially on the topic of pheromones which helped in later date research. His studies have been documented by way of several papers published in journals. He wrote the book " Khairi The Beloved Tigress " penning down many characteristics of tigers hitherto unknown to wildlife. He was awarded the highest civilian award the Padma Shri in 1983 for his contributions.

Another interesting encounter that foresters love to pass on was how Khairi who roamed the forest adjoining the guest house came in front of the Forest Minister's vehicle and to everyone's horror walked towards the vehicle and jumped in and sat in the front seat. One can imagine how many of them sitting inside must have pissed out of fear. Somehow Mr. Choudhury was called and seeing him, Khairi jumped out and embraced him.

All good things come to an end. Once a stray dog entered the campus to eat the meat given to Khairi. Khairi seeing it pounced and killed it. Unfortunately, she licked the blood and licked the scratches on her body. She developed symptoms of rabies and could not be cured. She was euthanized and breathed her last on March 28th, 1981, six, and half years after she was brought here.

After marriage, I had the privilege to go to the same place with my husband and kids. There I saw a photograph of little Khairi with her human father. So happy and contended they both were in each other's company. A small red cemented structure has been constructed where her name with her date 5th October 1974 to 28th March 1981 has been engraved. All the furniture on which Khairi lived and played have been kept as they were. Standing there I recapitulated my first meeting with her live with nostalgia and became emotional.

Tiger lovers can type " Documentary on Khairi the tigress " on Google and see how humane she had become living with humans. Not only this, one can also see how she played and cared for the animals living with her.

N.B - Images have been taken from Google and the copyright is with the owner.

great points altogether, you just gained a logo new reader. What might you suggest about your post that you simply made some days in the past? Any sure?

I'm now not sure where you're getting your information, but great topic. I must spend a while learning more or figuring out more. Thank you for magnificent info I was looking for this info for my mission. เบทฟิก

I am genuinely thankful to the owner of this site who has shared this wonderful article at at this time.

The tap root will drive down while the stem of the seedling will develop upward.

With havin so much content and articles do you ever run into any problems of plagorism or copyright infringement? My blog has a lot of exclusive content I've either created myself or outsourced but it looks like a lot of it is popping it up all over the internet without my authorization. Do you know any techniques to help prevent content from being stolen? I'd really appreciate it.

With havin so much content and articles do you ever run into any problems of plagorism or copyright infringement? My blog has a lot of exclusive content I've either created myself or outsourced but it looks like a lot of it is popping it up all over the internet without my authorization. Do you know any techniques to help prevent content from being stolen? I'd really appreciate it.

It is not my first time to visit this web page, i am browsing this website daiklly and obtain nice facts from here every day. 정보이용료 현금화; Janessa,

You've made some decent points there. I checked on the net to find out more about the issue and found most individuals will go along with your views on this web site.

Do you have any video of that? I'd love to find out more details.